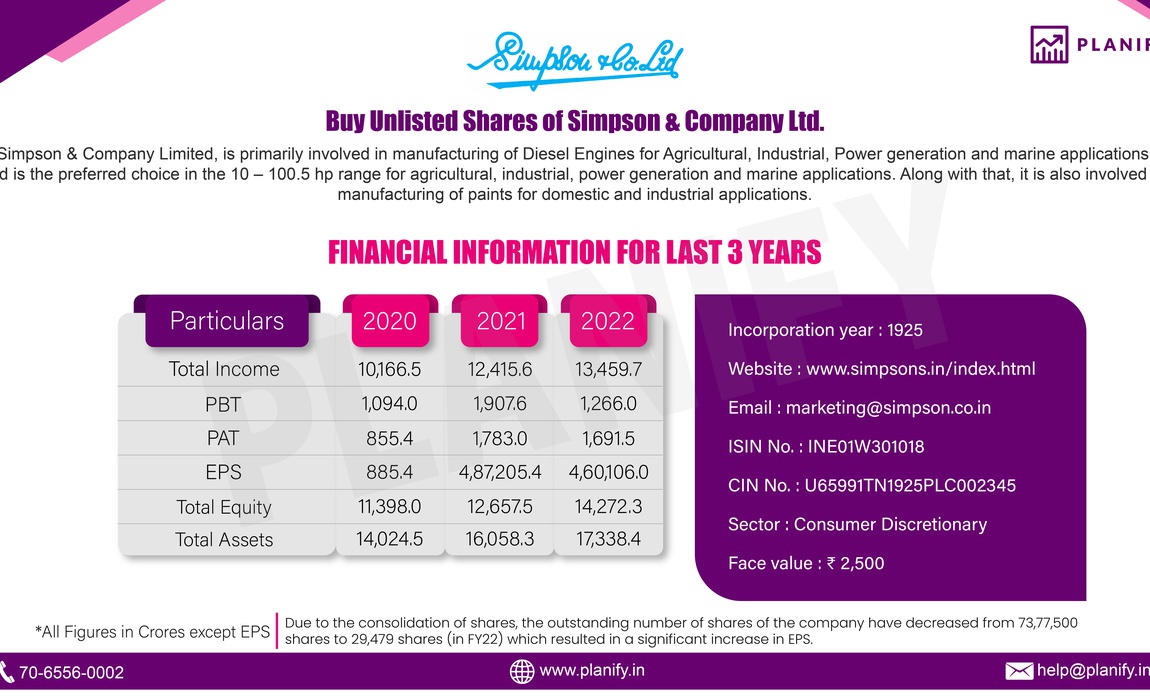 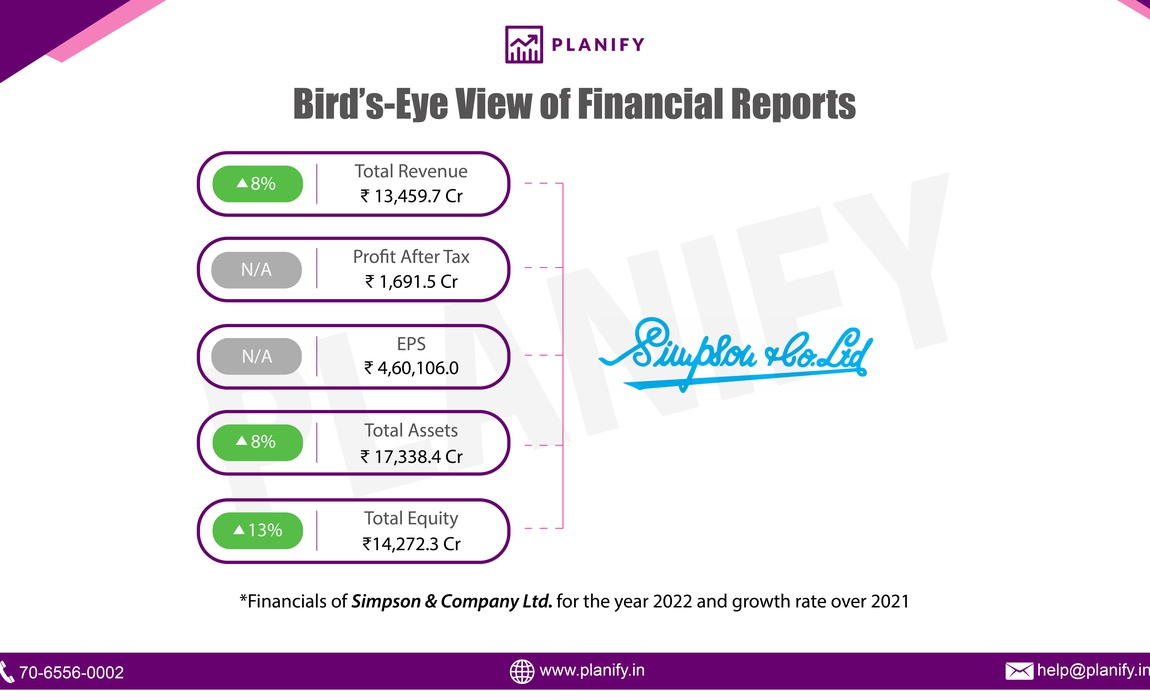 Here in this research report, you will get:
- Simpson IPO Review and Analysis
- Simpson Pre IPO Details

Discover and get a complete analysis on Simpson and Company Limited - Management, Business Model, Financials, Growth, Valuations, Funding Rounds, News and get the latest updates on Simpson Share Price.

About Simpson and Company Limited

Currently, company has no intention to launch IPO.

In land where 80% of the economy is agrarian, farm mechanism is the key driver for agricultural growth. Simpsons is a pioneer in introducing diesel engines in 1960 for farm mechanization in India and since then it has played a key role in helping the customers till the soil and haul there produce for 6 decades now. Simpsons produces a wide range of engines from 8-100.5 hp. .

Hospitals, Theatres, Restaurants, shopping malls, Remote unmanned locations wherever Simpsons generate the power, generate the value for Consumer and their business. More products are under development for offering a comprehensive range of products between 5 -82.5 kVA range.

With rich experience in engines and better understanding on Customer needs, Simpsons is able to offer a comprehensive solution to Fishing Boats, Passenger Ferries, Tourism boats. One of the models S325 has earlier approved for SOLAS, a stringent rule to qualify for “Safety of Life at Sea” by Lloyds Register of Shipping.

These engines can be used in  applications like Pumpsets to Hullers, Crushers in dusty environments. Simpsons offer the engines with standard scope of supply  for retail sales and are available in Simpsons D2c retail outlets for ready usage.

ADDISONS PAINTS & CHEMICALS LIMITED (APC) is a part of Simpson & Co. Ld. and was established in 1948. The company commenced its manufacturing activity to cater to their demands in collaboration with Hardie Trading Limited, Australia, and marketed products under brand names SPARTAN and TROJAN.

According to the type of fuel used, the engines are classified into three categories:

As Simpson and Company ltd. is primarily into the business of manufacturing diesel engines, so our primary focus will be on Diesel engine market.

The key industries that find engine applications are automotive, power generation, marine, agriculture gensets, construction, off-road equipment and other commercial vehicles. Therefore, it is crucial to comprehend an outline of these industries.

One of the most important sectors for India's economic development is the power sector. The increasing frequency of natural disasters that result in power outages makes the usage of standby generators necessary. The Indian diesel genset market size estimated at $937.1 million in 2022, and it is expected to advance at a compound annual growth rate (CAGR) of 8.8% during 2022–2030, to reach $1,839.5 million by 2030.. The rise of specialty retail, warehouse facilities, and the manufacturing sector's rising energy needs are projected to increase market opportunities for generators. As of 2021, significant volumes of diesel generators was generated from the range 5kVA-75kVA and Simpson and company offers products between the same range.

India is among the largest manufacturers of farm equipment like tractors, harvesters and tillers. India accounts for nearly one-third of the overall tractor production globally. To boost farmer incomes and growth of the agricultural economy, the Indian government released funds in June 2021 for farm mechanization such as establishment of custom hiring centers, farm machinery bank and high-tech hubs in different states. Agriculture and allied activities recorded a growth rate of 3.9% in FY 2021-22 and is expected to grow from USD 858 Billion in 2021 to USD 1714 Billion by 2027, exhibiting a CAGR of 12.3% during 2022-2027.

India's marine engine market, which in volume terms accounted for more than 13,000 units in 2019, is expected to rise over the next five years due to rising ship production and repair activity as well as expanding exports to other nations. The availability of reputable marine engine producers and commercial shipping firms in India is also boosting the need for marine engines in the nation. The market can be divided into diesel, gasoline, and other fuel types. Due to their greater efficiency in terms of fuel economy and lower price than petrol engines, diesel engines held the highest market share in terms of volume in 2019. The market is divided into four categories based on power: 5 to 75 HP, 76 to 350 HP, 351 to 750 HP, and above 751 HP. Due to the building of larger ships and boats, which require high power engines, the 351-750 HP power segment took the lead in the India marine engines market in 2019. Simpson and company offers their diesel engines in the range 10-100.5 hp.

Diesel Engine market is a fragmented market i.e. there is no clear leader within the industry and none of the player have enough market share to influence prices, production, investment and their competition.

Some of the recent government initiatives and investments are as follows: